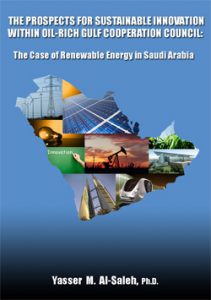 The Prospects for Sustainable Energy Innovation within Oil-Rich Gulf Cooperation Council: The Case of Renewable Energy in Saudi Arabia

With the increasing global enthusiasm for sustainable energy due to concerns over both the environment and the ongoing depletion of the world’s finite natural resources, renewable energy technologies have become widely recognised as a vital contributor to a sustainable energy future. Given that little research has examined the prospects of renewable energy from the – potentially significant – perspective of oil-rich Gulf Cooperation Council (GCC) countries, this book presents an empirical examination, from an innovation system perspective, of the potential emergence of renewable energy technologies as part of the energy system of the Kingdom of Saudi Arabia. Obviously rich in oil, Saudi Arabia is a rapidly-growing country that has abundant solar and wind resources that have not been utilised effectively to date. This book argues that pursuing the renewables agenda would not only be in line with the strategic interests of such a major oil producer, but also beneficial to the world as a whole.

A set of renewable energy scenarios for Saudi Arabia, through to the year 2050, has been developed – by means of the Delphi technique – as an integral part of the book. The scenarios, the first of their kind to be developed for such a major oil-producing country, represent the collective contributions of thirty-five highly-informed individuals. In effect, these foresight scenarios provide a framework for the systematic exploration of sustainable energy perspectives, as well as their implications in terms of potential reductions in life-cycle costs, greenhouse gas emissions and the conservation of fossil fuels. These scenarios were also used as an elicitation device to ascertain the opinions of fifteen senior stakeholders, who were interviewed in order to investigate the potential for the establishment of a sizeable renewable energy industry in Saudi Arabia. The analysis of these in-depth elite interviews has been largely based on dominant theoretical frameworks related to the systems of innovation. More specifically, this book articulates an analytical framework that collectively borrows from the concepts of sectoral and national innovation systems, incorporating an assessment of the functionality of applicable innovation systems in order to enhance both our understanding of the emergence and transformation of sustainable energy systems, and our awareness of the drivers and barriers related to such a process. Not only does this book bring together the concepts of sectoral and national innovation systems with the functions approach into a single conceptual framework, it also demonstrates that one way of empirically studying an emerging system of innovation entails incorporating foresight methodology within innovation systems thinking.

Since the empirical findings suggest that the blocking mechanisms (i.e. systemic barriers) identified are currently much stronger than the inducement mechanisms (i.e. drivers), it is argued that the widespread diffusion of renewable energy technologies is not currently viable in Saudi Arabia. The book thus goes further and provides a number of policy-oriented ‘ways forward’ that have the potential to change the status quo with regard to the limited use of renewables within the Saudi energy sector, which has not as yet been subject to close academic scrutiny. It should be noted in addition, that most of the book findings and recommendations are conclusive not only with regard to the context of Saudi Arabia, but may also be relevant to other major oil-producing countries (especially those characterised by oil-dependent economies), that may consider sustainability-driven innovation endeavours to utilise their renewable energy potential.