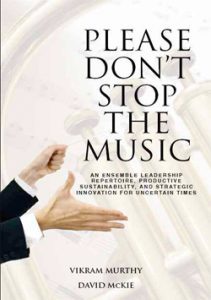 Business leaders operate in conditions of risk, uncertainty and unfamiliarity in an interdependent, culturally diverse and changing world. In this exceptionally well-researched treatise Murthy and McKie present a magisterial review of the extant literature, critically evaluating key modern management theories and their limitations in practice. On the strength of a superbly executed grounded theory study, Murthy and McKie argue for an augmented set of leadership practices – an Ensemble Leadership Repertoire – that can address the zeitgeist leadership challenges of finding individual meaning, delivering business success and contributing to society’s flourishing.

Read the abstract
Chapter one opens with an account of the journey that led to the writing of the book. It grounds the narrative in the authors’ own experiences, and in doing so it foregrounds the two central concerns that the book sets out to explore. The first of these is the increasingly indisputable assertion that, businesses face an uncertain and volatile environment that is very different to anything that they have experienced before. Arguably more vexing, is the burgeoning weight of evidence that suggests that this uncertainty is likely to continue into the foreseeable future. The second concern, a causal flow-on from the first, articulates the existential pre-occupation of organisations with the burning question of promoting productive sustainability in the midst of these prevailing and impending challenges. The book then underlines the importance of environmental factors, and explores their impact on organisations’ productivity. In doing so, it also questions the validity of methods for underwriting high-performance established by and espoused in practitioner and academic literature. By using a number of well-documented and high-profile failures amongst such high-performance exemplars lauded in popular practitioner literature, it highlights the fundamental flaw in relying on retrospective data to inform forward practice. Rather, it commends the utility of emerging paradigms for informing, and learning from, current business practice in iterative fashion, as being a far more dependable route-map to an organisation’s successful journey to the future.

This forward-looking orientation continues with two chapters (two and three) that seek to underscore the efficacy of experiential learning in a variety of ways: through the retrospective application of action research precepts to a community project to determine the basis of its success; through the theoretical explorations of the salutary outcomes of disciplinary interactions using the example of strategic entrepreneurship; and via a case study of the creation of opportunities for community economic development by grafting theories and frameworks across the for-profit and not-for-profit divide into community organisations. Chapter four adds a further twist to the swirling debate on productive sustainability by arguing for a reconfiguration of organisations’ sustainability challenges as one of improving innovation performance by creating dynamic balance between exploration and exploitation. In doing so it broadens the discourse to include organisational strategy.

Building on these ideas, the next three chapters examine leadership repertoires for dealing with different challenges. Chapter five posits that a firm’s strategy, leadership, and processes are not only correlated to specific environments, but that particular characteristics can be broadly connected with different eras. Chapter six then identifies the three new challenges of sustainable development, base of pyramid engagement, and managing risk in a globalised world that organisations need to address at this particular time. Chapter seven concludes the trilogy by identifying an emerging set of leadership practices for engaging productively with such high velocity change.

The final five chapters focus on a grounded theory study, which is both a piece of original research in its own right, and an avenue that enables an extension and validation of the earlier concerns through the two research questions “What existing and likely future challenges face contemporary Australian businesses and what current and emerging practices are leaders using to address productive sustainability?”. The study involves senior leaders of successful Australian-based businesses who participate in theorising both existing and future challenges and the parallel emerging practices that leaders are using to meet them. Chapters eight, nine, and ten frame the grounded theory research, and describe the sampling and analysis of data in the study. Chapters eleven and twelve describe the study’s findings, and its conclusions respectively.

The data from the grounded theory research reveals that participants describe the prevailing environment as complex. They evidence it in the display of one, or more, of the following three key characteristics: dynamic, layered, interdependent, interconnected, and patterned organisational challenges; marked/radical shifts in markets, competition, technology and customers’ definition of value; and uncertain, unpredictable, and uncontrollable global driving forces.

This research further develops the theory that leadership’s successful response to this complex environment is the Ensemble Leadership Repertoire. The name has been chosen to provide “vivid imagery” (Locke, 2001, p. 72) to three practices taken together and working in harmony: Firstly, sharing fates and interdependence; secondly, exploring deeper meaning; and finally the emerging practice of “Zeitgeist” (i.e., integrating cognition, conscience and collective spirit). As the name “Ensemble” suggests, these three practices are not manifested individually in exclusion to each other, and/or as a paradigmatic shift from one practice to the other. Rather, successful leadership demonstrates all three practices, as appropriate, as an Ensemble Repertoire in the pursuit of sustainable organisational productivity.